pinksneakerzhomeschool
Me and my girlies learning from each other

Our Noah’s Ark week was stretched out and broken up over the course of 2 weeks. MK was just not interested in doing school many days. And a few days we deviated for a Blueberries for Sal theme…which both girls LOVED. While the enthusiasm for Noah’s Ark was not matched as I’d hoped it would be, we still plugged through with many activities and many times singing “Rise and Shine”.

We continued with our RRSP work on the letter N. MK’s verse was Matthew 6:24- “No one can serve two masters.” While both girls learned this one very quickly, I’m not sure they have much grasp on the meaning. I tried several different ways to attempt to explain, but at least the truths are being planted in their little heart for later! I know a great song by Jill Phillips called “God and Money” so I sang that most days while we worked on their crafts. They really seem to grasp concepts so well through songs (even grown up songs) and books.

MK cut out and colored her verse. She loved making the treasure chest and decorating it with glitter. There is a treasure chest in one of her favorite cartoons, so that kind of became the focus, but I tried to circle back around to the idea of treasures in heaven several times. Such a weighty topic for a 3 year old! Just planting seeds! 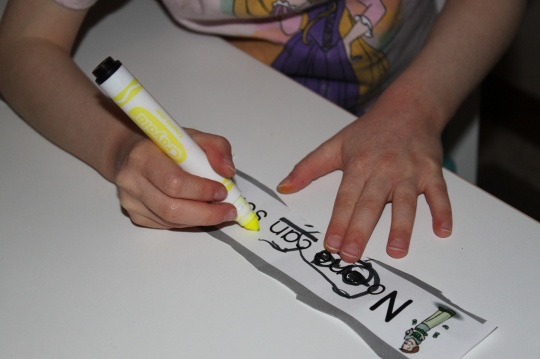 RJ is my little colorer..She loves to color and use as many colors as possible. I let her color this extra verse from the Noah’s Ark pack and put it together. This made her feel big. I can’t wait to start RRSP with her next fall! 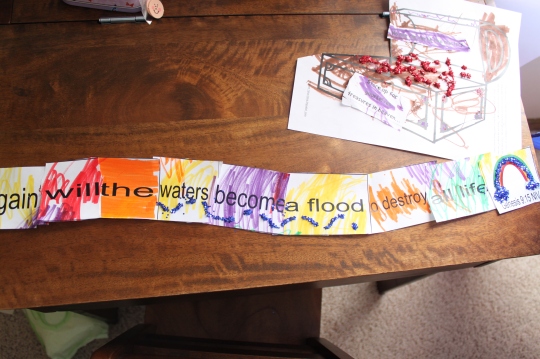 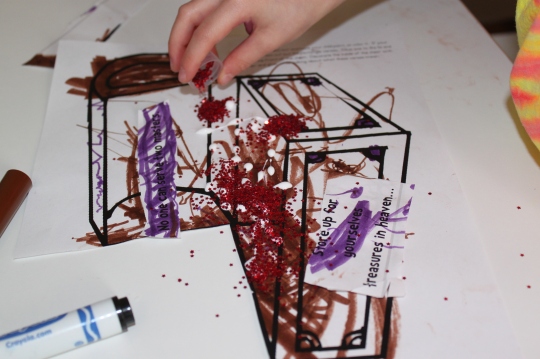 Because the motion for making an N so closely resembles an M (which MK makes quite well since it starts her name and all….) we did several different types of N to help grasp the difference.

We made an N out of rocks 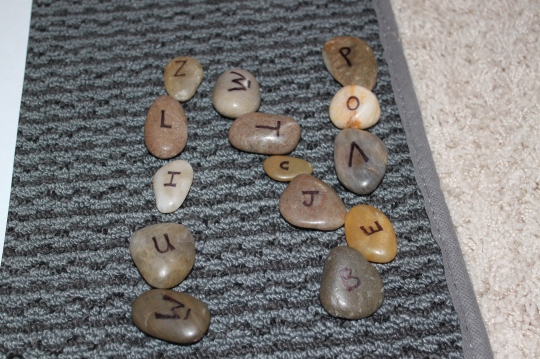 Playdoh N. This was MK’s first time doing these on mats like this and she did not entirely catch on to the idea of connecting the playdoh pieces. I definitely see the benefit in this type of activity and we will be trying it more in the future. 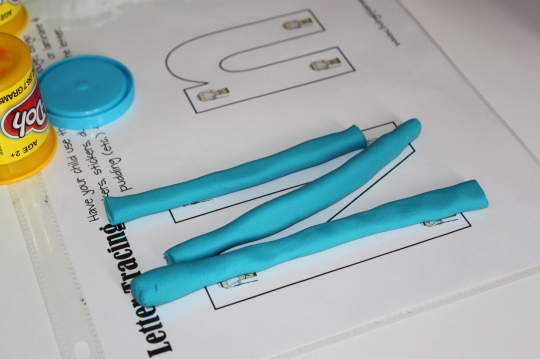 I printed off this pattern blocks letterN to use with our pattern magnets. The girls usually like these but this one was a little difficult because our magnets are flat and it was hard to see where one was and was not on the colored mat. I am going to try printing them in black and white next time, which is what we usually use with other pictures. (Sorry for all the shots of RJ in just her pull up…still hitting potty training pretty hard…) 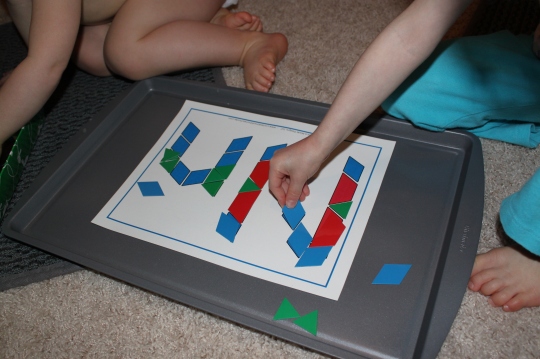 I was really trying to mix up the routine to find something that would really catch MK’s interest this week and so I let her do a couple of games on the Kindle. She loves this coloring app and so I encouraged her to trace the letters before coloring and she kind of got into that. 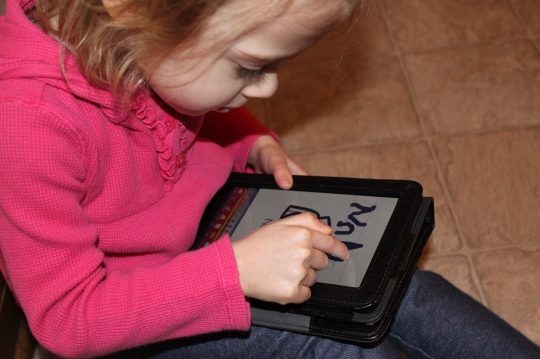 We also used glass beads on the Noah’s Ark mat. We used these Noah’s Ark printables for most of our activities this week. She asked for clothes for Noah and then she “bedazzled” them. It’s 2013 Noah. 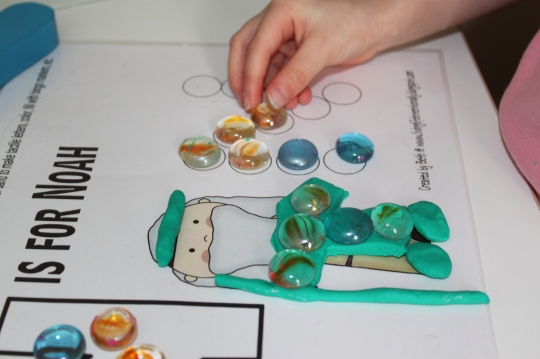 We did lots of games from the Noah’s Ark pack. 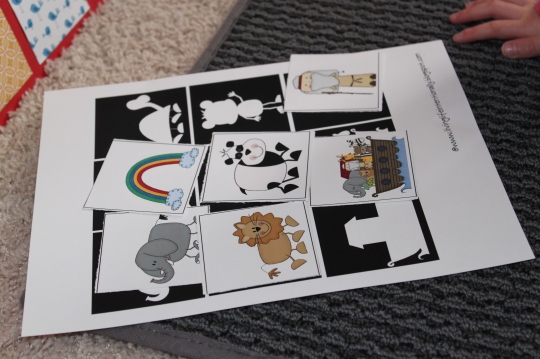 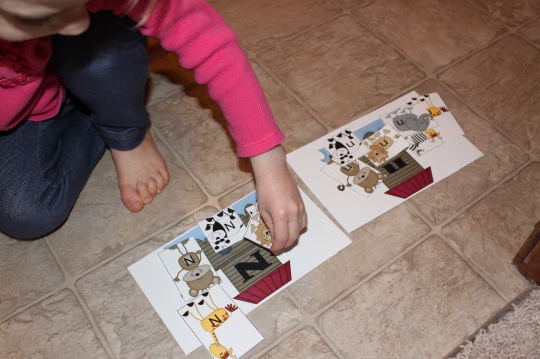 Noah’s Ark puzzle. MK has really gotten into puzzles lately and so the second time putting this together she was very proud to do it all by herself. 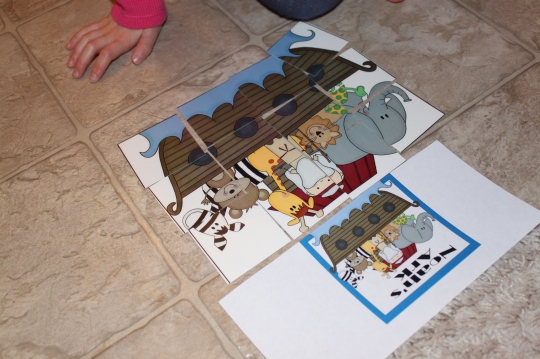 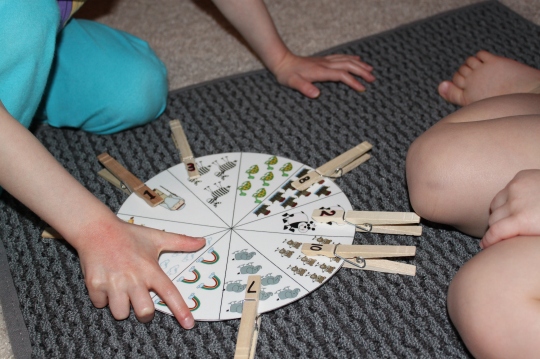 Prewriting and writing N’s. And several other worksheets from the pack. 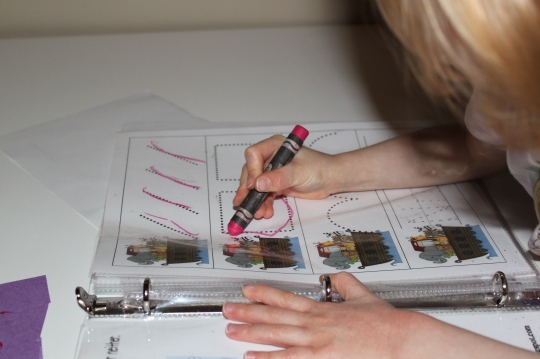 Counting the correct number of animals onto the ark. 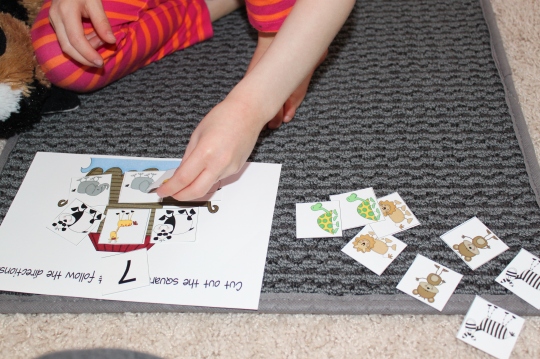 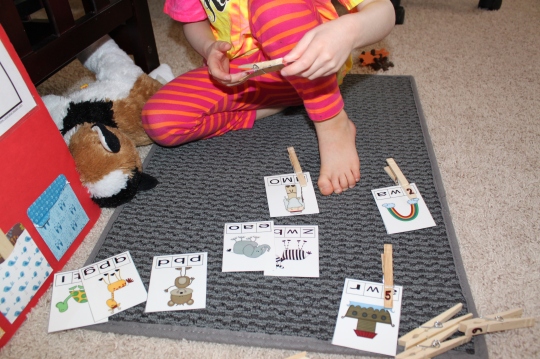 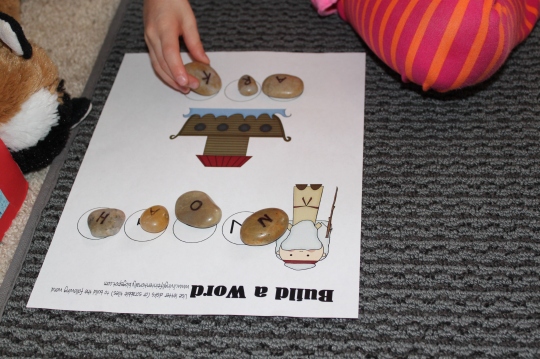 I made a very lazy mom sensory bin by putting two of several animals in a bin of rice. I really wanted to dye the rice blue and put a boat in…but it just never happened. The girls had just as much fun either way though…I put down blue wash cloths and a tub next to the bin to she girls could transer the animals across the water into the boat. (I know…it’s a stretch.) 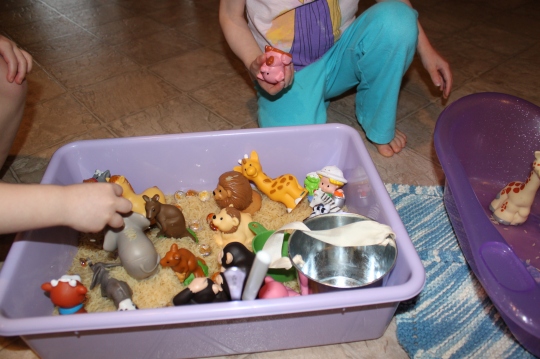 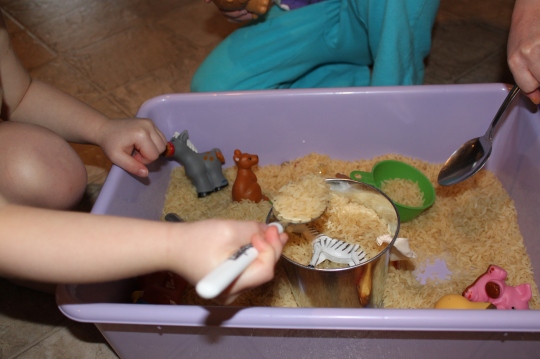 We made several crafts. The first day we did a letter N craft where the girls cut a boat and water out and glued them down then colored the picture.

We traced Noah’s ark animal shapes. Then MK cut them out and glued them to paper. Then I let her bust out the glitter again and jazz them up a little. Glitter makes every project the best thing they’ve ever done…they love it! 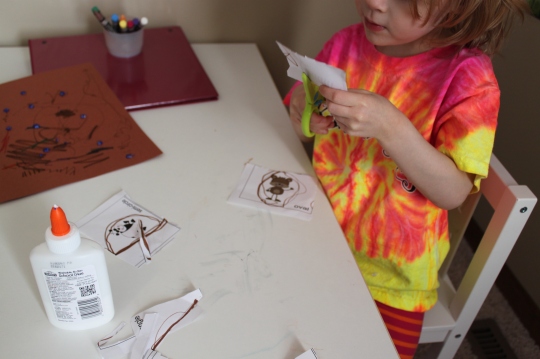 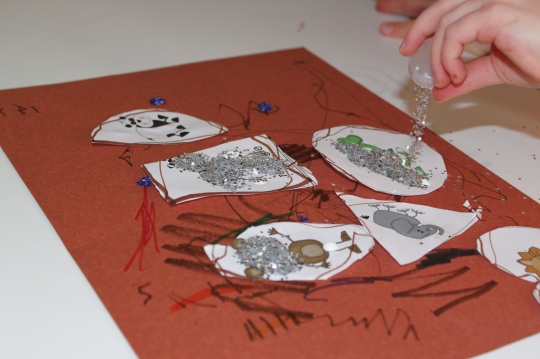 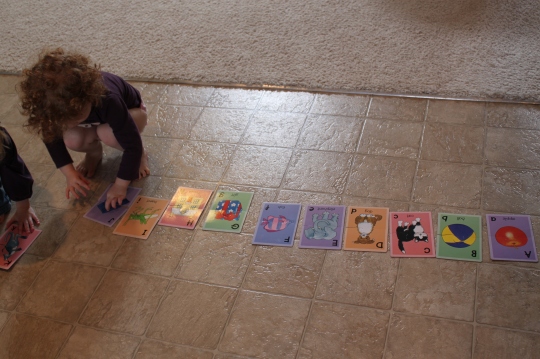 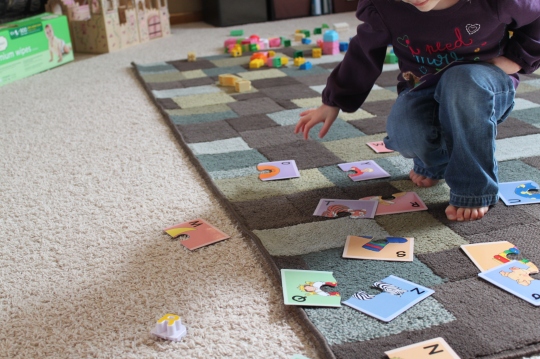 And of course where there are lines…there will be jumping. 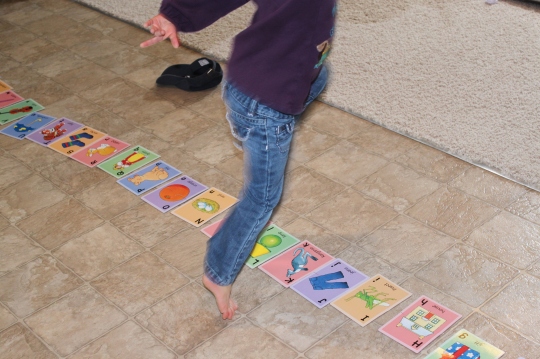 At one point about a week ago we had some crazy warm weather…like almost 80! I took the girls outside alllll day for 2 days to play. We were not going to miss a minute of that! There was plenty of mud from the 2 feet of snow 2 weeks ago (what is going on with our weather?!) so I let them get very dirty. Then to make it even worse, we busted out the water table, added some animals (I tried to pull in the Noah’s ark and water idea…but they didn’t bite). It got pretty muddy but sooo much fun. 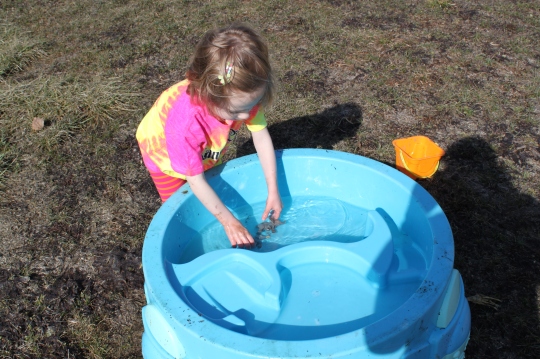 We just watched the Lorax for the 1043th time the night before so MK was walking around watering the entire back yard singing “Let it Grow.” Love the stuff they catch!

This was starting to turn my stomach a little…but I persevered. 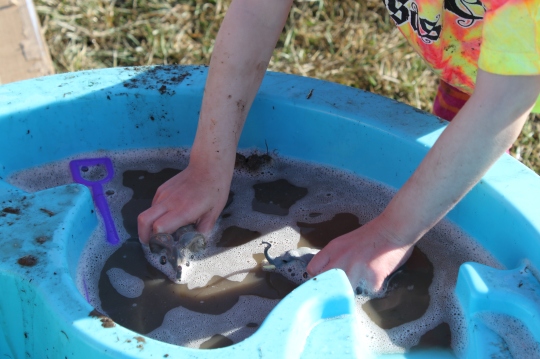 I’m not going to lie….there were PLENTY of frustrating moments in our little school world the past 2-3 weeks. But it has been very good for me. I feel like the Lord is refining my approach to our school time- not to push MK but to just help her learn from the things she is enjoying the most. To follow her lead, to facilitate meaningful times and opportunities for learning, but to be more relaxed on the format. This is outside of my little box, but I’m learning! Proverbs 16:9- “The heart of man plans his way, but the Lord establishes his steps.” I love when he reinforces his word through my littles!

For more great ideas for tots and preschoolers, check out these sites where I will be linking up!

Posted by pinksneakerz2 in Uncategorized